In recent years, the number of cases referred to ADR processes has grown exponentially, as parties to conflicts seek to reach mutually agreeable settlements while avoiding expensive, public and time-consuming administrative and court proceedings.   The two most common methods of ADR are mediation and arbitration.

Pullman & Comley’s ADR practice is led by Retired Judge Robert L. Holzberg, who served as a Connecticut Superior Court judge for more than 20 years before retiring from the bench in September, 2012.   While on the bench he served as the presiding judge for civil matters in the Middlesex, New Britain and Waterbury judicial districts, and most recently served as the Administrative Judge and Presiding Judge-Civil for Middlesex Judicial District.  During his career, he earned a reputation for his skill in crafting settlements in some of Connecticut's highest profile and complex cases and became one of the state's most sought-after mediators.

Anne C. Dranginis, Retired Connecticut Appellate Court Judge, joined the Firm as a member in fall 2016. She retired in January 2006 as an Associate Judge of the Connecticut Appellate Court after serving for more than 21 years on the Superior and Appellate Court bench. As a member in the Family Law Practice, Judge Dranginis focuses on litigation matters involving matrimonial law, corporate compliance and governance, trial strategy, arbitration and mediation, with a particular focus in appellate mediation.

Michael E. Riley, Retired Connecticut Superior Court Judge, also joined the Firm in May, 2017 after 13 years of service as a Superior Court Judge.  As a member of the bench, he served as the Administrative Judge and as Presiding Judge for civil matters in the Judicial District of Windham and most recently as the mediation judge in the Hartford Judicial District Mediation Center.  Retired Judge Riley serves as a mediator and arbitrator in state and federal court civil matters.

Other members of the ADR practice include American Arbitration Association (AAA)-qualified attorneys Andrew C. Glassman, a member of the  Commercial Arbitration Panel and the Employment Arbitration Panel with 35 years of corporate and commercial transactional experience, and James T. (Tim) Shearin, who handles mediations and arbitrations of business disputes. Tim is a seasoned litigator who has prosecuted and defended corporate clients in disputes involving breach of fiduciary duty claims; challenged mergers and acquisitions; contract breaches; non-compete, non-solicitation and non-poach agreements; intellectual property, and unfair competition assertions.

Law firms and individual practitioners have called on David Atkins, chair of the firm’s Professional Liability practice, to mediate lawyer-to-lawyer disputes over lawyer departures and provisions in firm partnership agreements, or under partnership law, governing compensation, profit distribution and the allocation of recovered contingency fees. In addition, attorney Fred Klein, who has more than 30 years of experience in handling energy, water and utility matters, has been involved in numerous arbitrations and settlements and is an AAA-trained mediator with experience in large complex multi-party mediations.

In 2020, Pullman & Comley was named the top ADR overall provider in in ALM's Best of New England Survey.  The firm's ADR Practice was also ranked by Best Lawyers "2021 Best Law Firms" in the highest tier of arbitration practices in the Hartford metropolitan area.

ADR in the Age of Zoom

ADR in the Age of Zoom

As the legal world has shifted overnight and state and federal courts are effectively closed for the foreseeable future, there has been a robust discussion among the bar and ADR providers about how best to provide mediation and arbitration services in a world when we can no longer meet in person.

Here at Pullman our three retired judges and their support team are fully trained and experienced in providing online mediation through Zoom.  We have found the process to be simple and accessible.  More importantly, the clients, counsel and claims representatives reported a high degree of satisfaction with it.  We communicated easily and confidentially.  All you need is a computer, laptop or iPad with a camera and speaker and you can mediate from anywhere in the world.

Counsel has been kind enough to let us share with you screen shots of our general session and breakout rooms (see below):

We are here to help. We are pleased to offer pre-mediation practice sessions with Zoom at no extra charge.  Please contact any one of us to schedule a mediation or arbitration.

On behalf of all of us at Pullman & Comley's ADR practice, we extend our best wishes for the continued safety and well-being of you, your families and staff.

Pullman & Comley is pleased to introduce our Alternative Dispute Resolution (ADR) Video Series, designed to help clients as they plan for and participate in mediations. Retired Judges Anne C. Dranginis, Robert L. Holzberg and Michael E. Riley, who collectively have more than 65 years of judicial experience and almost 25 years in private mediation, discuss best practices in the world of ADR. The videos, each of which focuses on a different aspect of the mediation process, were excerpted from a conversation the judges recently had over Zoom, like many of their mediations over the past two years. 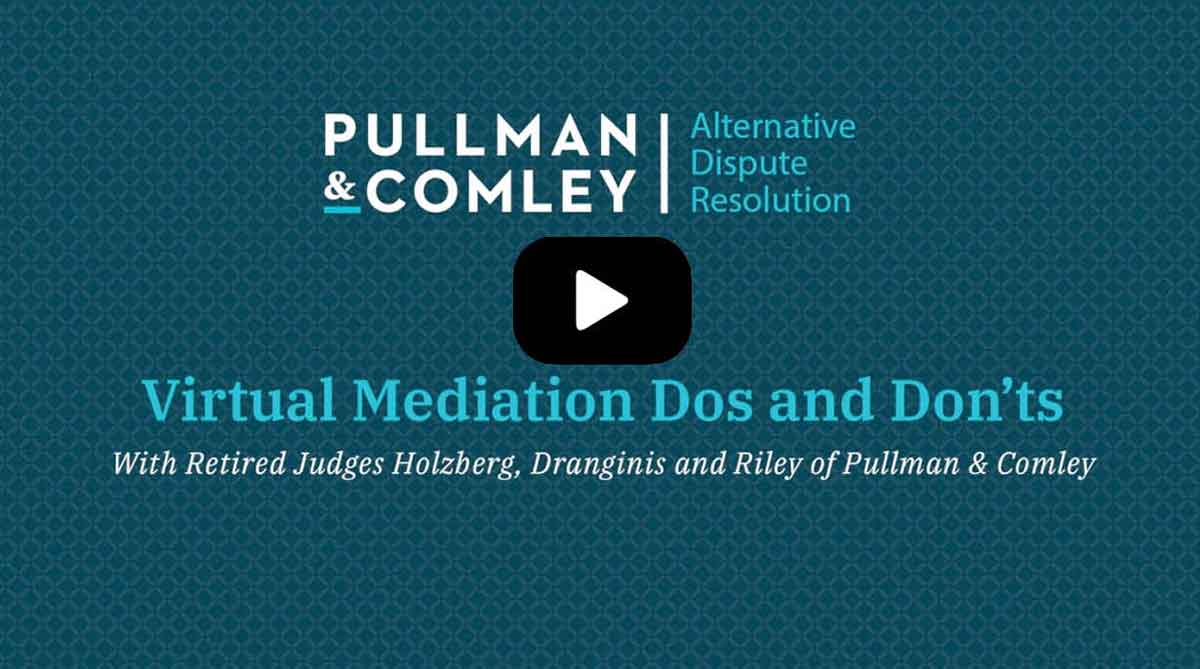 Realistic Primary and Secondary Goals of a Mediation 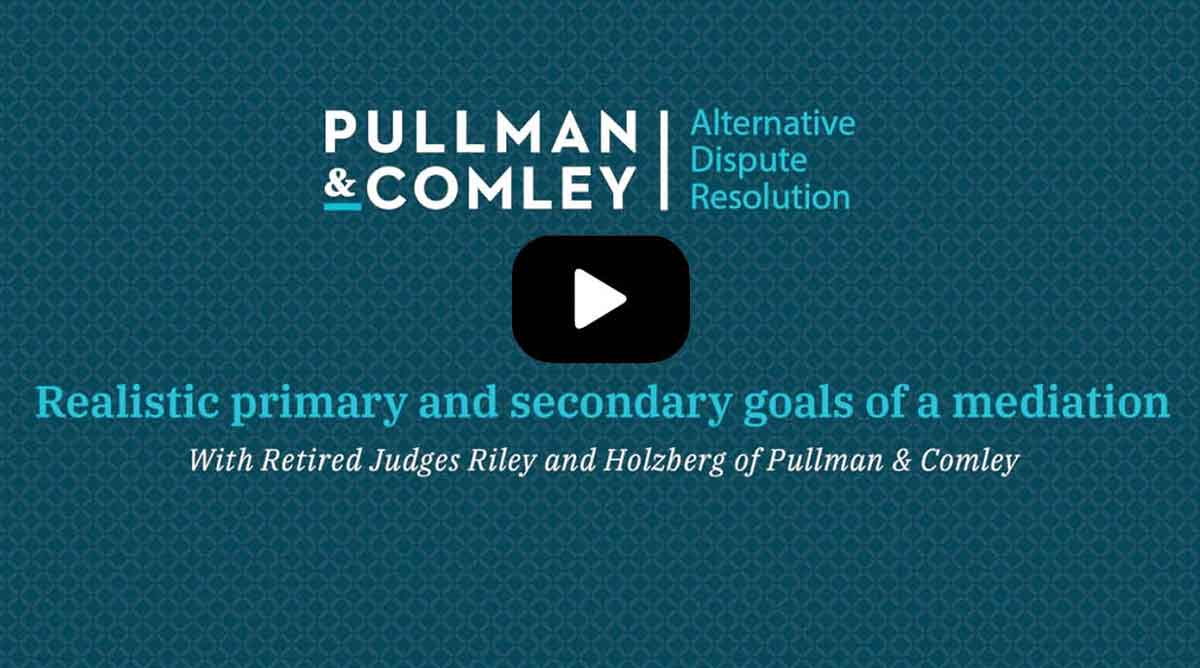 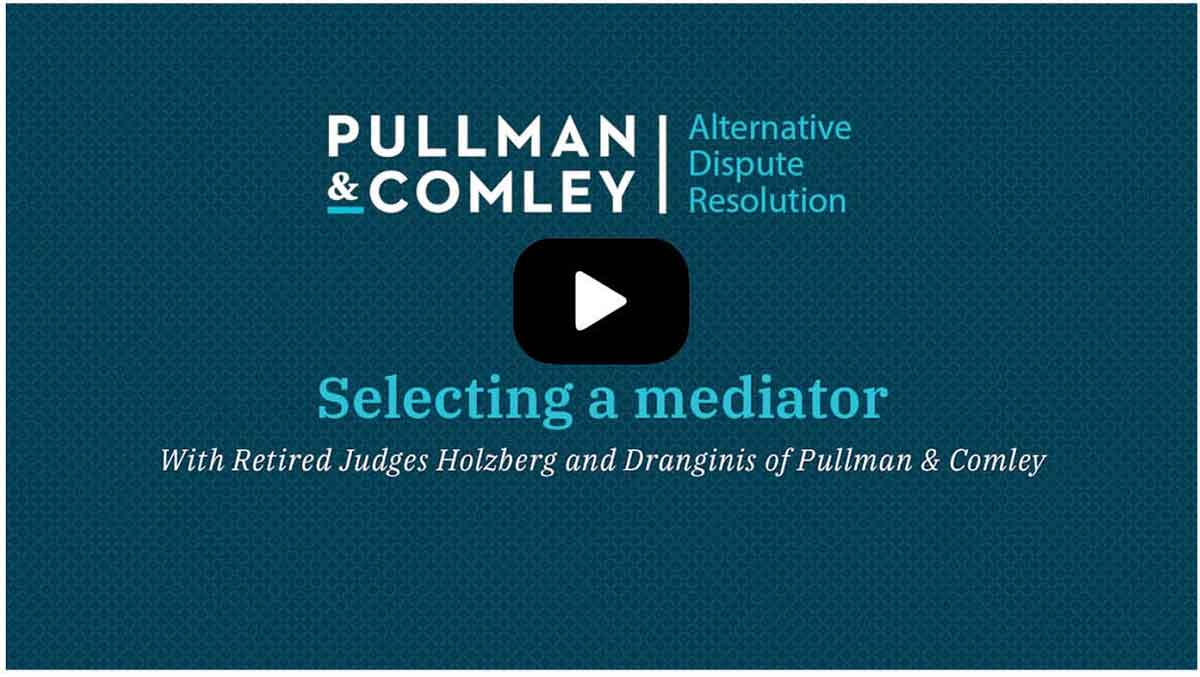