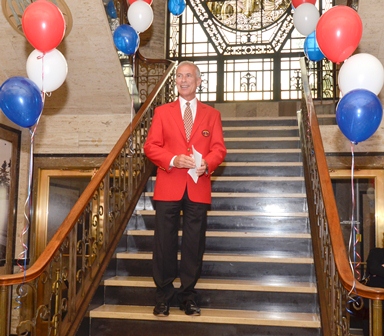 BRIDGEPORT,:  John F. Stafstrom, Jr., a partner in the Bridgeport office of Pullman & Comley, LLC and longtime Bridgeport resident, was selected today by the Board of Directors of the Barnum Festival as the 2013 Ringmaster of the annual celebration, at a special event at the Aquarion Company Headquarters at 835 Main Street in Bridgeport.

Mr. Stafstrom was selected as the 65th Ringmaster of the organization, which was created in 1948 to commemorate the life and achievements of P.T. Barnum, world famous entrepreneur and former mayor of Bridgeport.  Over the years, a veritable “who’s who” of regional and community leaders have held the position; Mr. Stafstrom succeeds 2012 Ringmaster Frank J. Carroll, International Vice President of the International Brotherhood of Electrical Workers, and 2011 Ringmaster Armando Goncalves, regional president of People’s United Bank.

“Both in his work as an attorney, and in his involvement in the community, John has demonstrated an outstanding commitment to Bridgeport and the local region,” said Festival President Ken Maloney.  “We know he will bring a real energy and vitality to the ringmaster role as we celebrate the Barnum Festival’s 65th year.”

Mr. Stafstrom has been an attorney with Pullman & Comley LLC since 1981.  He chairs the firm’s Public Finance Department, and has been involved in some of the city and state’s most exciting development projects, including Steel Point in Bridgeport; HarborPoint in Stamford; the new Jackson Laboratories facility at UConn Health Center and the Connecticut Airport Authority.  In addition, he is a recognized leader in numerous community and civic activities.  He is the former chair of the Bridgeport Democratic Town Committee, and from 1987 through 1994, he served on the Bridgeport City Council, including serving as Chairman of the Budget and Appropriations Committee.  Mr. Stafstrom was a founder of Career Resources, Inc., a program that provides job placement assistance and career services to individuals on public assistance, returning veterans, and others in need.  He is a member of the Board of Directors and Executive Committee of the Bridgeport Regional Business Council and is a former trustee of Bridgeport’s Discovery Museum.  Mr. Stafstrom serves on the National Leadership Council of Lambda Legal, a national organization committed to achieving full recognition of the civil rights of lesbians, gay men, bisexuals, transgender people and those with HIV through impact litigation, education and public policy work.

Pullman & Comley, LLC provides a wide range of legal services to clients in the New England region, as well as throughout the United States.  In addition to public finance, the firm’s major practice areas include corporate and business law, environmental, health care, litigation, property valuation, real estate and trusts and estates.  The firm has offices in Bridgeport, Hartford, Stamford, Waterbury and White Plains.